This last Saturday my wife and I decided that it was time to stop the July 4th Weekend Drink-Fest and do something more constructive. So we hit the road and started our preliminary explorations of the areas around Dallas. The plan on this day was to go south of town via I-45 then west on I-20 past Fort Worth then jump off on SH-180 towards Mineral Wells. That was the extent of our pre-planning. The interstates around Dallas are the same as anywhere else – busy and full of semi-psychotic individuals in a hurry to go shopping (I assume). Once we got off the interstate we began to see the side of Texas we had imagined. Lot’s of antique yards and oil well services and nodding donkeys and little houses with goats in the yard. I didn’t get many pictures of the interesting roadside stuff because I was driving and I am also not quite comfortable with taking shots of people’s houses – it breeds a bit of distrust and there are a lot of guns out there in the hills.

We didn’t see anything out of the ordinary on the drive until we were about a mile from downtown Mineral Wells. Looming on the western horizon was a large structure that I assumed was a grain elevator because it was the only tall building in town, but as we got closer we could tell that it was a huge building – maybe a hospital or hotel. As we drove right up to it we saw that it was boarded up and that it was awesome. 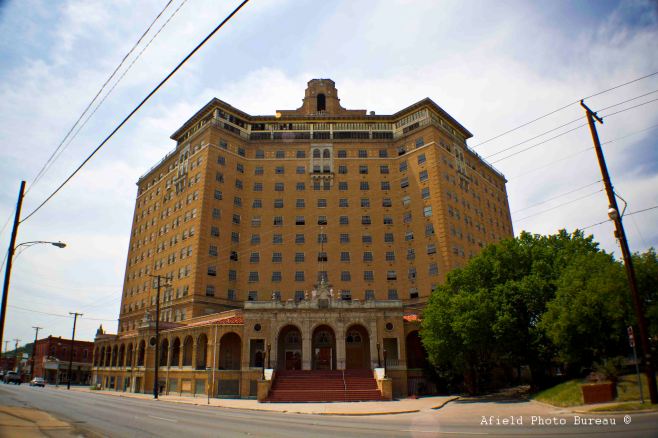 Jesus Christ! What is THAT? – Actual first words spoken by us.

As an archaeologist and as one of a pair of very snoopy people, I decided that we must stop and investigate immediately. Now had we done some online research we would’ve found out that this was the Baker Hotel, a 400+ room hotel and mineral spring spa that opened just a few weeks after the great stock market crash of 1929 and closed for good in 1972. We also would’ve found this website that has a ton of pictures and historical ephemera as well as stories about how it is haunted by the former owner’s mistress who threw herself from the top floor – witnesses say they have smelled her perfume and found lipstick stained glasses in her room long after it was empty. The story that creeps me out the most is the one regarding a former elevator operator who enjoyed jumping into moving elevators – he came up short once and despite the help of  bystanders he was ripped in half . His upper torso supposedly haunts the basement corridors screaming in agony. Had we known some of this stuff we probably wouldn’t have snooped around as brazenly as we did. 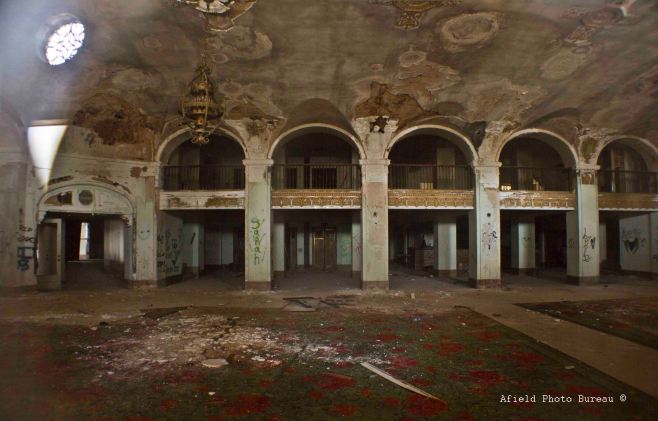 The grand front lobby through a gap in the boarded up window. Elevators in the background. 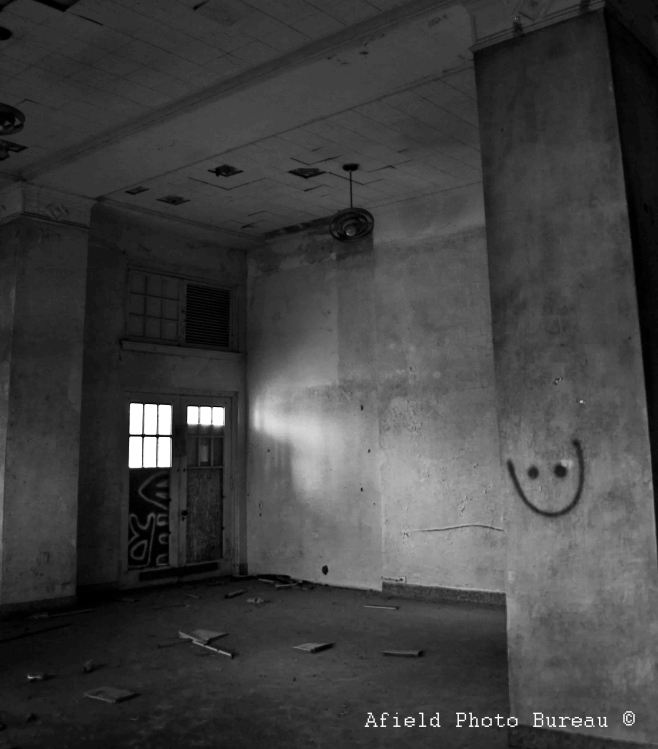 Another shot though a window near the southwest corner of the building.

Looky-Lous like us aren’t prevented from climbing up to the main-floor veranda and looking in through the gaps in the boarded up windows. There is a lot of evidence of people being inside the hotel after it was closed. Graffiti and beer bottles are in nearly every room. They used to offer tours of the old girl but the failing roof has caused a lot of structural damage so now one faces a $500 fine if found inside – I would gladly pay the fine if I was allowed to roam the halls for an afternoon – a very bright afternoon. 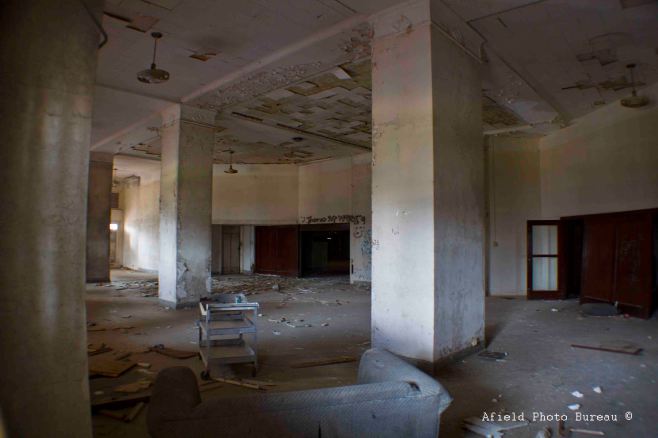 A large room on the south side of the building. 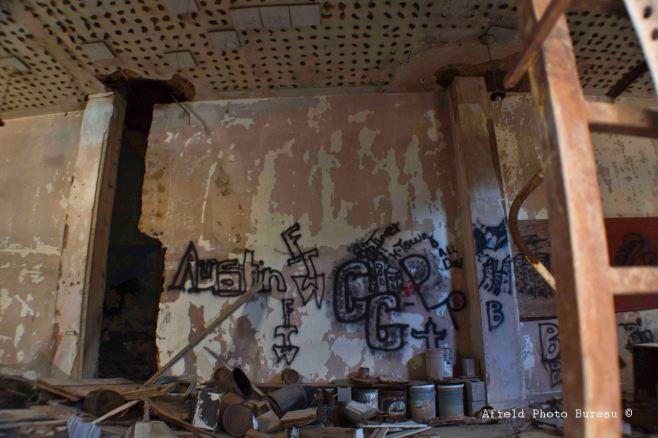 The hotel lodged some very famous people over the years. Everyone from Clark Gable to Lucille Ball to Will Rogers enjoyed the mineral baths and entertainment. Even Bonnie and Clyde stayed here – apparently they enjoyed dancing in the ballroom and some folks say that occasionally their ghosts are seen there dancing cheek to cheek. 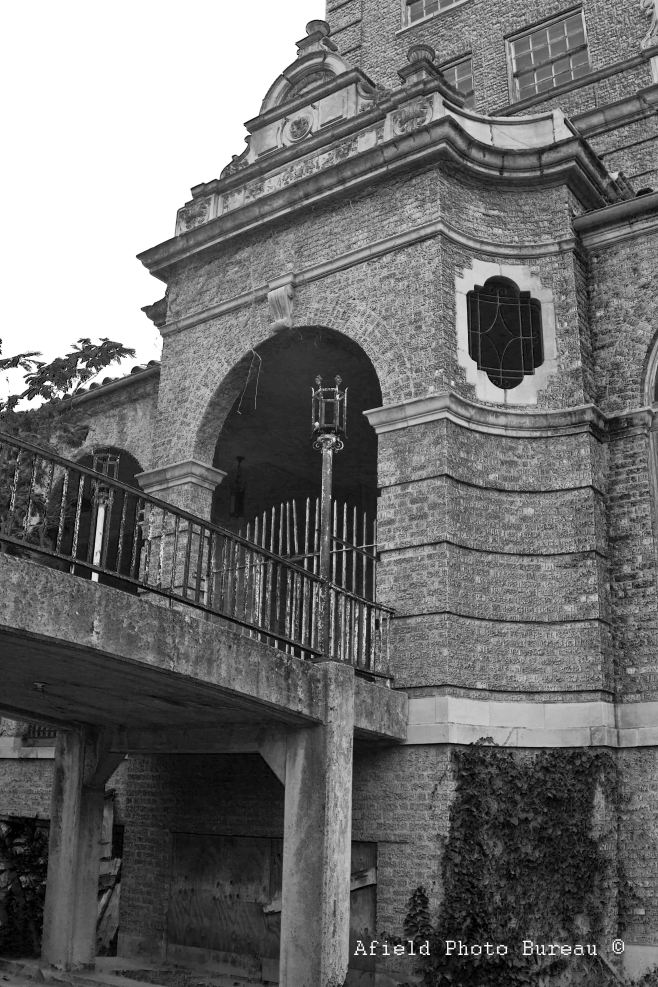 Bridge from the main floor to the outdoor pool – The first hotel pool in Texas.

The owner, T.B. Baker, went to California during the early stages of construction and stayed at a hotel that had a swimming pool. Upon returning he stopped construction and had everything moved to the west to make room for an olympic-sized swimming pool that was to be filled with the local mineral water. The pool was built over the original basement, which was used as an employee area and a changing area for hotel guests. 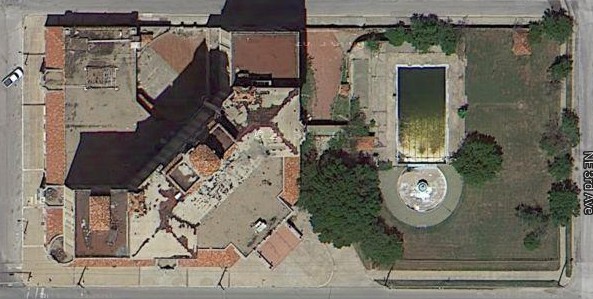 An overhead shot from Google. That pool is skuzzy. 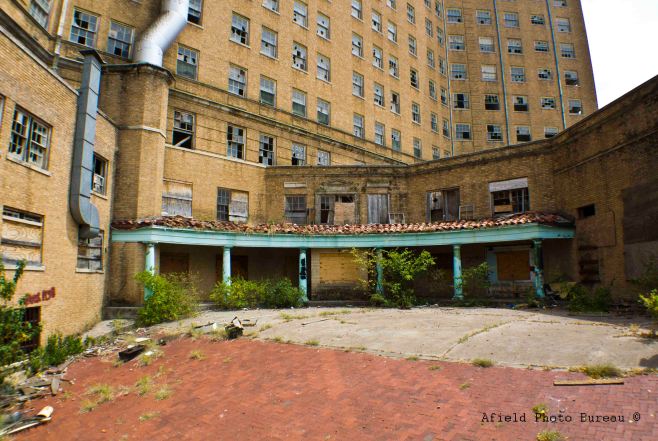 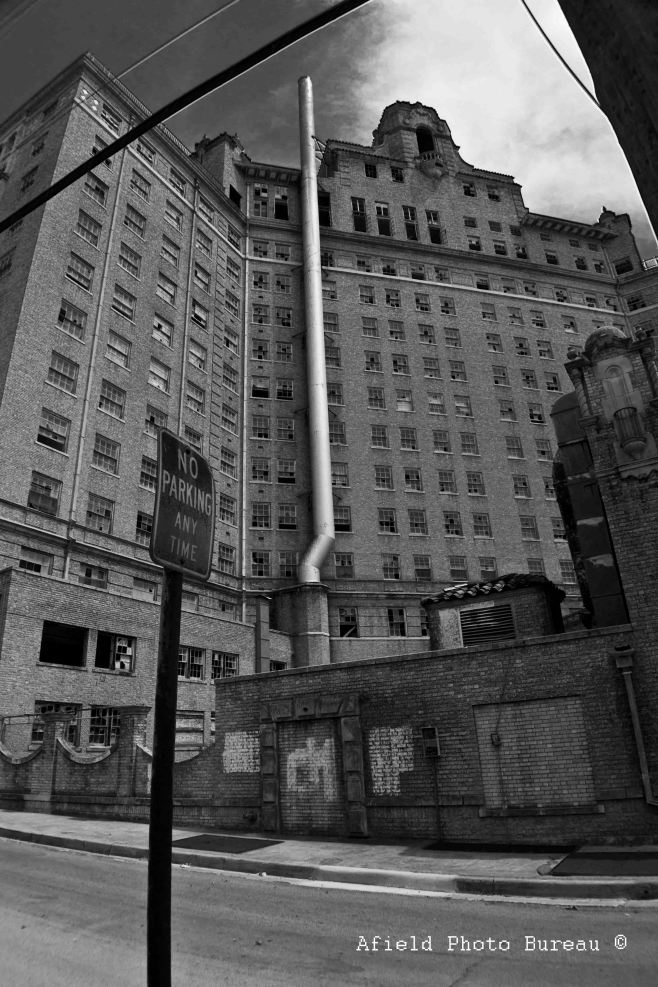 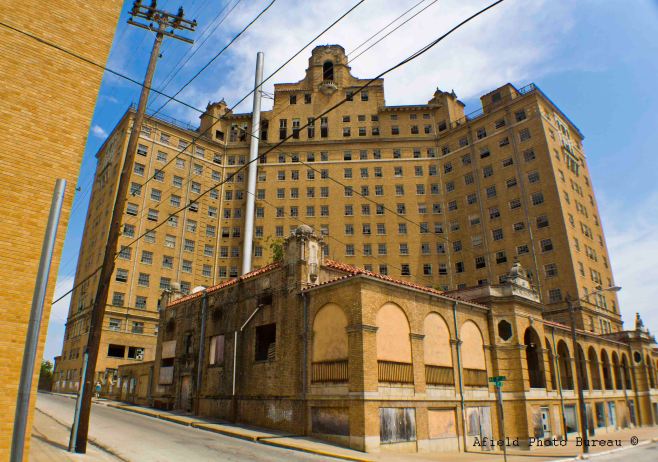 There is something about that smoke-stack that looks crematorium evil.

In the photo above, right above the first O in the copyright, is a steel door with two broken windows. From a foot away I couldn’t see into the inky blackness so I went to stick my head through to get a better view and got a blast of air in my face that was at least twenty degrees cooler. The sensation threw me back and gave me an all over shiver – even my wife, who was a half block away, noticed me jump back in fear. After that I decided to go across the street and take this picture rather than investigate further. Later on during our explorations near the rear entrance I felt the same thing and realized its the ventilation of the building and that it’s totally normal. I steeled myself and shoved my head back through the hole, flipped up the flash, and took this last photo on our way out of town. 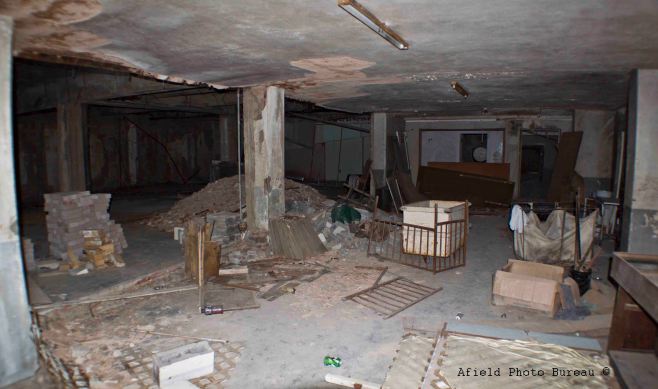 I expected to see a ghost in this picture.

I can assure you that we will be going back to explore the Baker again. If you know of any other places like this in North Texas let me know in the comments.

This site uses Akismet to reduce spam. Learn how your comment data is processed.

One of those decisive moments, perhaps...
A big yawning dog wearing a t-shirt and a serious man giving me the stink eye...
Seems like a good week for street photos - stay tuned for gritty city pics...
First photo walk in over a year yesterday thanks to @jeff_larason and the @bostonstreetscollective crew- @mattydelsol working the shadows, just as nature intended...
Bonus Saturday Blooms...
Beacon Street Strider...
Comm Ave Squared...
Beacon Hill Blooms...